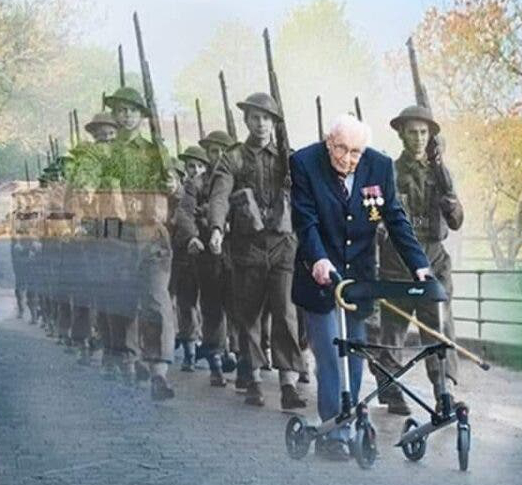 On the 30th April 1920 a hero was born in Keighley, Yorkshire. Someone that would have an impact on all of us during this pandemic.

May 1940 he was conscripted to the army as a private and then went onto officer training were he gained promotion to be an Officer.  Serving various theatres of war then being demobilised in 1946.  He took a post as a sales manager of a concrete company and later became managing director.

Early 2020 there were rumours of something called corona virus, none of us thought it would cause so much disruption and heart ache or create a World Record holder.

On 6 April 2020, during the COVID-19 pandemic, and with his 100th birthday approaching, he began a fundraising campaign for NHS Charities Together, a group of charities supporting staff, volunteers and patients in the British National Health Service (NHS). He aimed to complete one hundred 25-metre (27-yard) lengths of his garden, ten lengths per day, with the help of a walking frame, branding the endeavour “Tom’s 100th Birthday Walk for the NHS”.

On the morning of his 100th Birthday he had raised £30 million, with gift aid it was over £39 million – which was the highest amount a fundraiser had ever raised doing a walk.

He became a Knight Bachelor on the 20th May 2020 in the grounds of Windsor Castle by the Queen which he said was a highlight of his life.

Throughout his life he had always tried to help others, passionate in his beliefs, some things as Unite Reps will all have faith in.

“Tomorrow will be a good day”