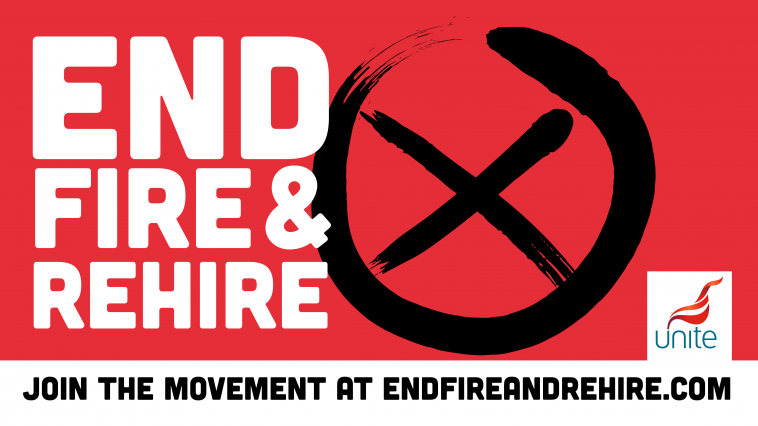 As you read this, bosses are using the pandemic as an excuse to tell millions of people to accept worse pay and conditions — or face the sack. What’s worse is that more of our bosses could be about to do the same to us as furlough ends. That’s why we need to urgently force Boris Johnson’s government to ban fire and rehire.

Pressure is building. Ireland and Spain have banned it. Unite workers are organising their workplaces to fight back. Countless Unite members are protesting right now and tomorrow Unite MPs are holding a debate in Parliament. This is our chance to secure a change in law, if we pile on enough pressure.

Will you email your MP telling them to end fire and rehire? Once you’ve clicked the button, just scroll down and type your postcode in the blue box. If you’d rather tweet, you can show support that way too.

One in ten workers are already threatened with Fire and Rehire. Like bus drivers in Manchester who were told to sign a new contract with cuts to sick pay and longer hours within 7 days — or be sacked. While businesses have been given government loans and grants, workers and their families are being hung out to dry.

The government has already spoken out against fire and rehire tactics in Parliament, even describing them as ‘bully boy tactics’. With one stroke of a pen they can ban it just as other countries have — but right now, they probably don’t know just how important this issue is to so many.

That’s why we’re launching a national campaign today to make sure whether they look at newspaper headlines or social media, they see thousands of us speaking out. So that whether they’re walking down their high street or on the green seats of the Houses of Commons — they hear an unmistakable message: end fire and rehire now. Will you speak out today? If you don’t want to email your MP, you can tweet #EndFireandRehire instead.

Assistant General Secretary, Unite the Union P.S. We’re sharing some powerful stories from workers today, take a look at our video about fire and rehire and share with your friends.